The World through my eyes. Book 1. Part 4: Brain, Heart, Mind & the Dark Knight (Beta Version: Help me complete it) 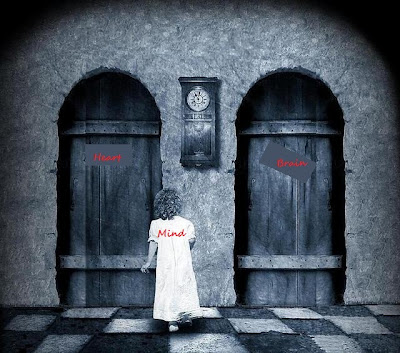 Here I am putting forth a thought of mine in a way it came to my mind. And I clearly understand that everybody's perception about the topic would vary. So, As I see it, the three entities: Brain, Heart and the Mind differ in the logic and the way they think or react. There is a diffuse thin line between them.

If you wish to know what kind of a person somebody is, try to peep into his/her heart. The heart is the most beautiful part of a human. It is pure and free from any impurities. The Heart is like an innocent Child.

Heart is the one responsible for true emotions, true feelings, true love. The heart thinks like a child. It always says the right things innocently, or should I say, it talks about emotional needs of a person. But it has no understanding of what is right and what is wrong, or what is good and what is bad for you. It is impulsive. It is the one in who is in control of the mind in artists, poets, lovers, ...

Brain is what differentiates humans from primates, animals, and other living organisms.
Brain is responsible for wisdom and knowledge. It is the one who knows what is indeed good or bad for you. There is no place for emotions in the brain. Brain is something that stops you from repeating the mistakes of the past. It is the one who is in control of the mind in successful people. Brain is the center of integrity of a person.

Rachel Dawes: Wait! You could die. At least tell me your name.
Batman: It's not who I am underneath, but what I *do* that defines me.
Rachel Dawes: [realizing] Bruce?
[Batman turns and leaps off the roof]

The mind is the ultimate decision maker. It is the integrator and manipulator. Whatever good or bad you do, is because of your mind.
Know the mind of a person if you wish to know the character of him/her. It would help you know the circumstance-specific decision making of the person.

The Conscience is the brightest entity that ever could exist in a human. And the brightness comes from a healing Aura, that vanishes all the evil and heals all the good in its Gotham, the Mind.

But this brightness is relative. The Conscience is the personification of brightness in those minds where it is alive, clear and functional. These minds maketh the good humans with humanity; as their minds are under the guidance of a good guardian. But not always is this Conscience alive, or fully alive. In most cases the conscience is alive but the Mind seldom obeys it. In such circumstances, the glory of these minds is lost and the brightness fades eventually. In the worst cases, the mind kills the Conscience and these minds drift away from light. They become darker than the darkest Black Holes.

But remember, though it could be killed, it could not be corrupted. It is incorruptible.

The world as I see it by Nikhil Bhirud is licensed under a Creative Commons Attribution-NonCommercial-NoDerivs 3.0 Unported License.
Based on a work at nbhirud.blogspot.com.